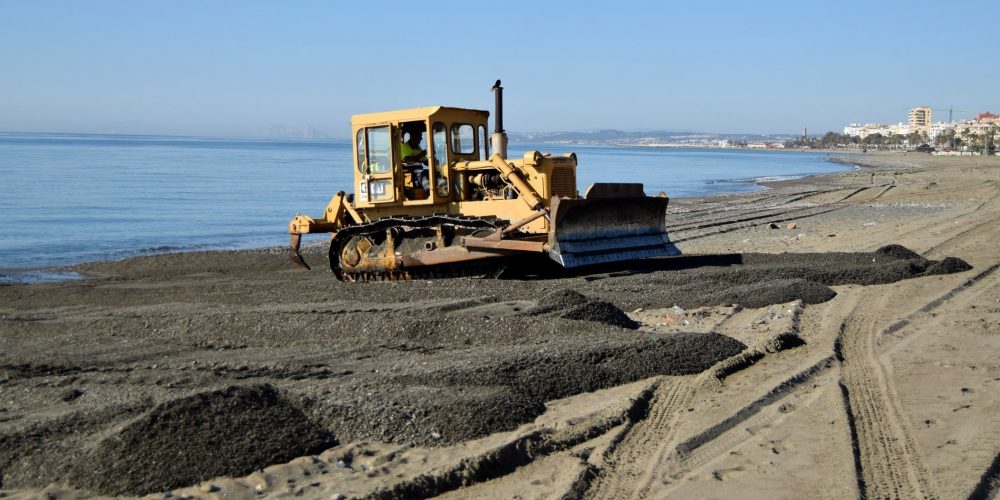 Estepona council are going to execute a total of 250 work actions along the coast to prepare the beaches of the municipality before the start of Holy Week. The councilor responsible for the Playas area, Susana Aragon, has indicated that, after the storm of last week, the Consistory has begun work so that the coast is in optimal condition for tourists visiting the city During the holy week.

Aragon has indicated that since this week two bulldozer machines are working on sand movements to recover the profile of the coast that was affected by the swell and the strong winds of last week.

The works with the machinery have begun next to the Jacaranda building in Punta de la Plata and in the Padrón area. In both enclaves, steps of sand caused by the storm are being eliminated, the surface is being flattened and in addition, the entire area is being cleared and cleaned.

Susana Aragón pointed out that at the same time that action is being taken on the profile of the entire coastline, other actions are being carried out, such as the installation of showers, litter bins and walkways, the development of bathroom modules and the painting of access areas and the sifters.

The Consistory will intensify the works to fine-tune the sanitation and the services of light and water. In addition, the oases have been arranged and the accesses have been conditioned from the promenade and the coastal path. In the works planned for the next few days, special attention will be paid to the preparation of the fronts of chiringuitos and hotels in the town that are on the beachfront.

The municipal official has indicated that the maintenance of the beaches is carried out throughout the year “so that with the arrival of good weather they are in a good condition for the enjoyment of the citizens”. In this regard, he stressed that “a tourist municipality like Estepona cannot afford to leave the maintenance of beaches in the background”. Therefore, “the government team is strongly committed to improving the coastline to present its best image before the influx of tourists that is expected for Easter.”