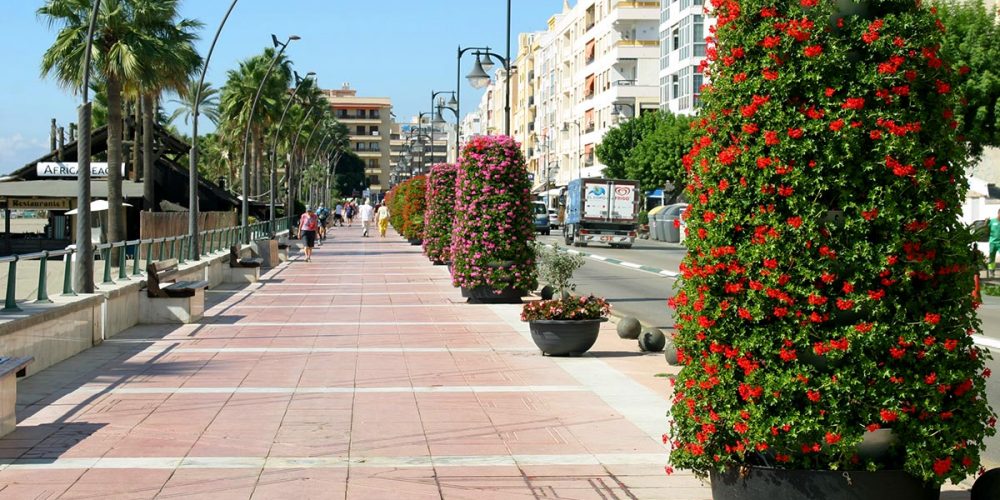 The refurbishment will include almost 2.5 kilometres of promenade that runs from Punta La Plata to the Marina of Estepona, with an investment of about 3 million euros

The City Council of Estepona has put the work out to tender for the complete remodelling of the Estepona seafront promenade. The mayor of Estepona, José María García Urbano, explained that the public tender is going to be tendered to select the most suitable project for the reform and modernization of this emblematic area of ​​the municipality, which has become a tourist reference and one of the places most travelled by the residents and visitors.

The reform will include almost 2.5 kilometres of promenade that runs from Punta La Plata to the Marina of Estepona. The works, which will involve an investment of approximately three million euros, is expected to start after the tourist season to avoid discomfort during the summer months and greater influx of people. The project will include the renewal of pavements and existing infrastructures and replacement of urban furniture, among others.

García Urbano has commented that the City Council’s objective is to modernize and transform an infrastructure that was implemented more than two decades ago to “put it in line with the improvement and transformation that is taking place in the city.”

The mayor also indicated that “now is the time to address its comprehensive remodelling”, as it will be connected to the coastal corridor project, “an ambitious project that we started in 2012 in order to make passable the entire coast for citizens so they can walk or play sports along the sea front. “In regard, he recalled that, to date, more than 75 percent of the coast of Estepona has been connected, which means a total of 17 kilometres linked by pedestrian paths.

It should be remembered that at this time, the Consistory is currently running two new ones in the municipality that will involve the connection over the Taraje and Guadalobón streams. In the Taraje area, a bridge of 20 meters will be built, as well as three landscaped areas, and new lighting and urban furniture will be installed.

The second of the projects, which are already underway, has brought with it the installation of a wooden bridge 43 meters long on the course of the Guadalobón stream, being the largest that has been built in the city so far.

During these years, the City Council has carried out the improvement of playgrounds and leisure areas that are on the seafront and has provided this area with public toilets. It has also opted to strengthen gardening in this area, making it one of the most attractive in the city.