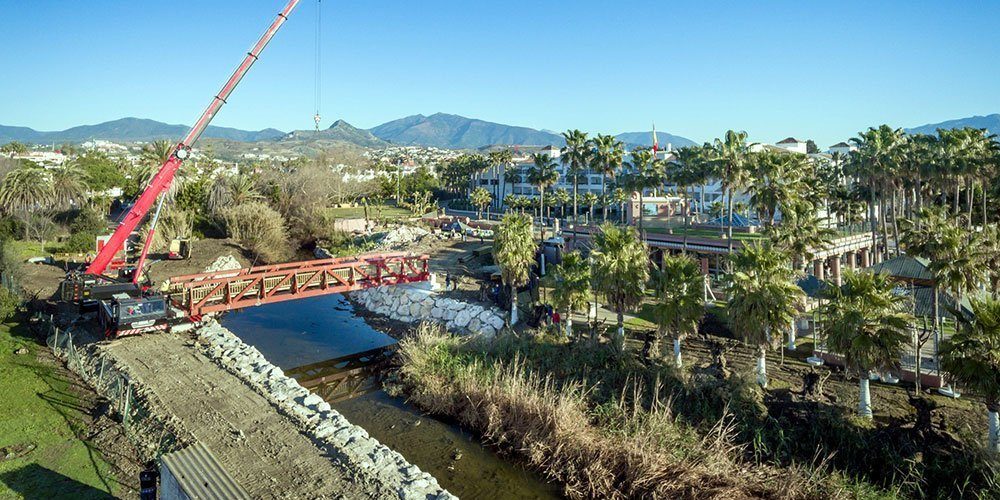 During the next two weeks work will continue of concreting and gardening in this new section that will connect with Costalita and El Saladillo.

The City Council of Estepona informs us that a wooden bridge has been installed over the Taraje stream to create a new stretch of coastal corridor. The deputy mayor of the Development Infrastructure and Tourism (FIT) Ana Velasco, explained that this new infrastructure has a length of 20 meters and will connect with the Costalita urbanization and in the future with Punta El Saladillo.

The head of the FIT has indicated that the works will continue in the area during the next two weeks with the concrete footings for a footbridge of 130 meters in length is being built in the area with the landscaping. Deputy mayor Velasco also indicated that three landscaped areas will be created with species that need little water and adapt well to the sun and the marine environment.

Deputy mayorVelasco pointed out that the Taraje river bridge is the last of the three that have been executed in the city in recent months. In addition, recently a wooden bridge 43 meters long and 3.5 meters wide was built over the course of the Guadalobón stream. This infrastructure will connect the Riviera Andaluza urbanization with a new residential area that is running to the west.

The third of the bridges is the one that has been installed on the Anton stream section and connects a plot adjacent to the Andalucía Beach urbanization with the El Velerín area, which has allowed the connection of five kilometres of pedestrian path.

In addition to the section of coastal corridor on the Guadalobón stream, the Consistory is promoting other paths in the west of the municipality. One of them will continue west to the aforementioned bridge and will be undertaken by the developer that is developing a residential complex on a nearby building plot, so the works will not involve any cost to the municipal coffers.

The municipal official has indicated that the coastal corridor project aims to unite the more than 22 kilometres of coastline via pedestrian paths and with the aim of allowing citizens to walk and practice outdoor sports .   To date 17 kilometres have been connected which represents 75 % of the total project of the coastal corridor, it is also necessary to integrate the remodelling of the promenade in the town, that will be undertaken after the summer and will embellish and improve 2.5 kilometres that run from Estepona Port to the zone of Punta La Plata.

Finally, Velasco has reiterated that the coastal corridor is changing the appearance of the coast after valued spaces that were isolated and could not be enjoyed by citizens. In this sense, this project is already offering residents and tourists the possibility of traveling through unknown areas of the city and environments that until now were inaccessible; as well as privileged views in spaces in which to perform healthy outdoor activities.