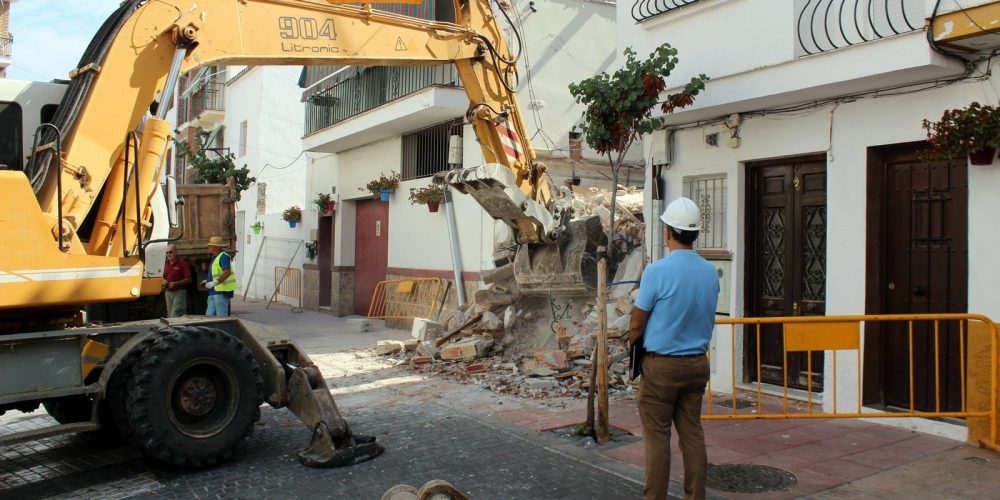 The new space, which will be part of the ‘Estepona Garden of the Costa del Sol’ project. Will have an area of ​​84 square meters and will be planted with Orange, Cypress trees and ornamental plants.

Estepona Council reports work has begun  to create a new passage that will connect Calle Portada and Nuestra Señora de Los Remedios. The deputy mayor of the area of ​​Development, Infrastructure and Tourism (FIT), Ana Velasco, explained that the work has begun with the demolition of an old house, after the agreement reached with its owners, and will continue with the execution of a new public space in the area.

The area will be paved with cobblestones, as in other streets of the old town, with seating and new lighting installed.

The deputy mayor of the area of ​​Development, Infrastructure and Tourism (FIT), Ana Velasco, stressed that the new passage will meet a double objective; “On the one hand we embellish and gain new public spaces for the enjoyment of the neighbors, and on the other we facilitate easy access between the streets of the old town that forced pedestrians to make long journeys to move to adjacent streets” . In this specific case, the Solís neighborhood is going to approach the historic center.

The new passage will be added to another eight that has been created by Estepona council in lots that were occupied by old houses that were uninhabited. The new spaces that have been created for public enjoyment are ‘Los Patitas’, María Cintrano, Francisca Contreras, Felipe Campuzano, Aljibe, Alicia Villapadierna, The Garden of Andalusian Poets and Ortega Vela. All these spaces are located in the old town and have significantly improved traffic on streets for which it was previously necessary to make unnecessary trips.

Velasco has added that “with the remodeling of the urban center, not only is the city embellished with new spaces for the citizens, we also reactivate the local economy with this type of productive investments that generate employment in local companies”. Finally, the government team will continue to work so that the historic center of Estepona is an enclave for tourist and leisure interest, where visitors will enjoy one of the most beautiful old towns in Andalusia.

In addition, Velasco recalled that the City of Estepona has put out to tender the remodeling of eleven new streets within the project ‘Estepona Garden of the Costa del Sol’, through which development has promoted Economic and social harmony, making it one of Estepona´s main tourist attractions.

The municipal official has indicated that the project ‘Estepona Garden of the Costa del Sol’ has already meant the remodeling and beautification of more than six hectares in the old town, which has meant an investment of more than 10 million Euros.